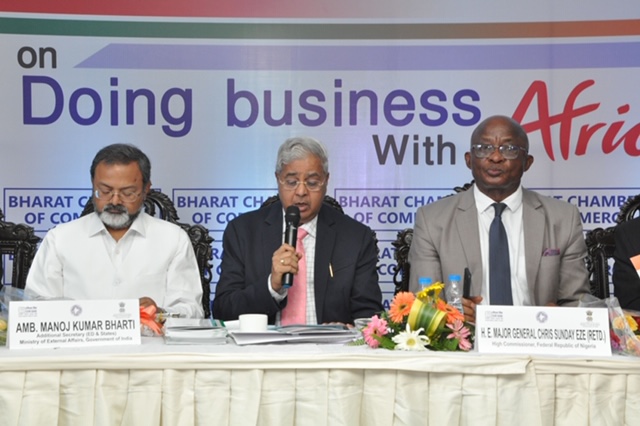 Bharat Chamber of Commerce organised a Conference on “Doing Business with Africa’ on 14th June, 2019 in  Kolkata to boost trade business between West Bengal , & other states in eastern India  and all nations in Africa .  In his inaugural address ,Ambassador Manoj Kumar Bharti, Additional Secretary (ED & States), Ministry of External Affairs, Government of India outlined various aspects of India-Africa trade which has reached close to $72 billion in recent times and informed that the Government of India is targeting to achieve $150 billion trade with the African continent in the next 5 years. Explaining the purpose of the recently set up Economic Diplomacy and States Division at the Ministry of External Affairs, Government of India, Ambassador Bharti stated that the existent Investment Promotion Division was transformed into the Economic Diplomacy and States Division a few years ago, when it was realised that most of India’s diplomatic work begins and ends with Economic Diplomacy.  “The objective of this Division is that whenever there is an economic content in the Ministry’s relationship with other countries there should be one specialised division to take care of those requirements”, added  Ambassador Bharti .
Speakers who addressed the Conference included His Excellency Major General Chris Sunday Eze (Retd.), High Commissioner of Nigeria in India, Mr. Eddison Mensah Agbenyegah, Deputy High Commissioner of Ghana in India, Mr. Souleymane Boureima, Counsellor, Embassy of Niger and Ambassador Shiv Shankar Mukherjee, Former High Commissioner to the U.K., South Africa, Namibia and Ambassador to Egypt.
Bharat Chamber of Commerce ‘s  ”  Africa Desk ” ,was  launched with the objective of exploring the emerging trade and investment opportunities in Africa and bridging the information gap in bi-lateral trade and investment,  In his welcome address , Mr. Sitaram Sharma, President stated that it is perhaps for the first time that a Conference of this  magnitude is being held at Kolkata to boost business potentials and opportunities both with the countries in the African continent as well as to tap the vast potentials of West Bengal. The Conference was organised in partnership with the Economic Diplomacy & States Division, Ministry of External Affairs, Government of India. .
EXIM Bank, which has been credited for undertaking deep rooted studies on the scope of doing business with the countries in the African continent as well as executing the Government of India’s Lines of Credit was a Lead Sponsor at the Conference.  The contributions of EXIM Bank in  were highlighted by Mr. Mukul Sarkar, Chief General Manager, EXIM Bank.
The  diplomats present  on the occasion highlighted the recent developments in the African continent which could attract Indian investments.   The diplomats highlighted on effort  to create  ” African Continental Free Trade Agreement  ”   as well as  development of  African continent as single market to facilitate trade across all nations in Africa   without any hindrances for  goods and . services . including air connectivity between different nations .
Ambassador Shiv Shankar Mukherjee having profound experience in diplomatic relationship with African countries, observed, “Africa is no longer the dark continent but the sun-rise continent.”  Ambassador Mukherjee called  for proactive  business development effort by Indian private sector in Africa .
“Promoting business opportunities of Eastern India and West Bengal in particular was the focus at the Conference. Considering the special initiatives that the Government of India is taking to spearhead bilateral trade and investment with countries in the African continent for mutual advantage, there is no doubt that in a couple of years’ time, India’s trade and investment in the continent will increase manifold,’ Mr. Sitaram Sharma said . He  emphasied on effort to explore  the scope of exports of the item in which India has technological strength of global benchmark . According to Mr. Sitaram Sharma , Africa will be the business destination for the 21st Century and, therefore, facilitating business opportunities need to be looked from a larger perspective and explored. 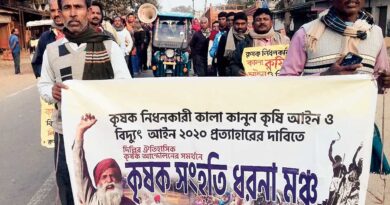 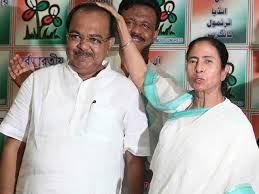 SOVAN Chatterjee Resigns As Kolkata Mayor Amidst Of Marital Discord 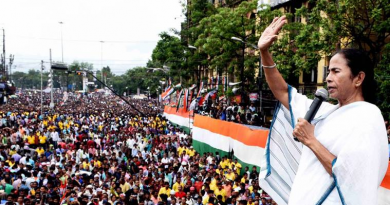