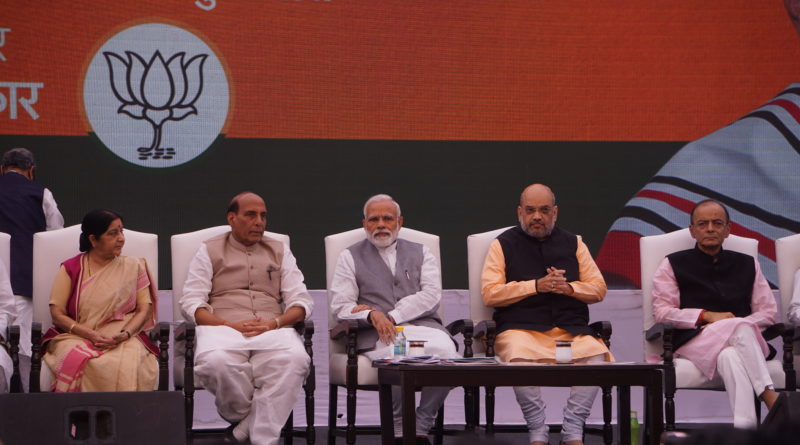 BHARATIYA Janata Party has made public   2019 Lok Sabha Election manifesto tiled ‘Sankalpit Bharat, Sashakt Bharat’ committing to payment of pension to farmers and small traders, if it is returned to power. Our ‘Sankalp Patra’ is a vision document that lists the expectations of 130 crore Indians,” Union Minister for Home Affairs Raj Nath Singh said. The Manifesto also promises 33 per cent reservation to women in Parliament and state legislative assemblies   and abolishes Triple Talaq. The saffron party has made nationalism as its top priority in the elections manifesto with PM Narendra Modi even stressing that “nationalism is our inspiration” at the launch event held at its headquarters in New Delhi on Monday. The party’s top leaders including BJP president Amit Shah, Finance Minister Arun Jaitley, Minister of External Affairs Sushma Swaraj, Home Minister Rajnath Singh, Defence Minister Nirmala Sedhuraman and the Minister for Social Justice and Empowerment Thawarchand Gehlot were among those present on the occasion. Manifesto drafted by a 12-member committee chaired by Rajnath Singh contains 45-page document lists out several of the party’s poll promises which begin with the issue of national security. Stressing “Zero-tolerance approach to terrorism”, the party says it will give a free hand to the security forces in dealing with terrorism. The party will continue to strengthen and modernize the armed forces, combating infiltration and reinforcing border security. India’s largest political party has also committed that it would be giving every farmer an annual income of Rs 6000.The party has also promised to double farmer’s incomes by 2022, a pension scheme for the small and the marginal farmers and Rs 25 lakh crore investments in the agricultural -rural sector. Although there is no mention of a loan waiver scheme, the party promises to give interest-free loans for 1-5 years. The BJP in its poll manifesto has said that it will implement the Citizenship (Amendment) Bill if voted to power. In the manifesto, the party reaffirmed its position to render protection to only “Hindus, Jains, Buddhists and Sikhs escaping persecution from India’s neighbouring countries” and grant them citizenship.BJP has said it remains committed to abrogate Article 370, which gives autonomous status to the state of Jammu and Kashmir, and Article 35-A of the Constitution, which provides special rights and privileges to the state’s “permanent residents”. According to the manifesto, the scrapping of this article was justified as it stood in the way of the government’s efforts towards development, security and equality in the state. In its Sankalp Patra, the party also promises to “explore all possibilities within the framework of the Constitution and all necessary efforts to facilitate the expeditious construction of the Ram Temple in Ayodhya”.The  manifesto only encloses a new scheme to provide collateral-free credit to up to 50 lakh entrepreneurs. He said she said: Soon after the BJP released its manifesto, two  Kashmir  valley base  political parties  PDP  led by  Mehbooba  Mufti and  National Conference president Farooq Abdullah lashed out  at the party saying  “They talk of abrogating Article 370. If you do that, the accession will also not stand. I think this is the wish of Almighty, we will get freedom from them”. Congress Party also ridiculed the party over a gaffe in one of its manifesto promises for women. Congress shared the screenshot of one of the points in the BJP manifesto wherein it was written,” “Women’s security will be given more priority. We have constituted the Women’s Security Division in the Home Ministry, and have made strict provisions for transferring the laws in order to commit crimes against women, in particular in a time-bound investigation and trail for rape.”

“We are fully committed to nationalism and zero tolerance towards terrorism,” the Union Home Minister said.The BJP was committed towards implementing a Uniform Civil Code in the country and all alternative options will be explored for the construction of a Ram temple at his birth place Ayodhya in the most conducive manner. The saffron party would ensure the passage of the Citizenship Amendment Bill in Parliament with utmost respect to every state’s cultural values, Singh said. For rural development, the BJP promised to spend Rs 25 lakh crore in the next five years.”Will give Rs 6,000 yearly income support to farmers and pension to small and marginal farmers above 60 years of age,” Singh said. 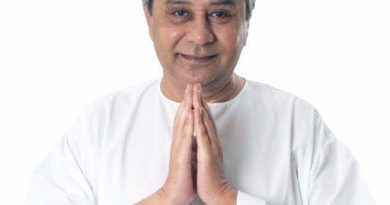 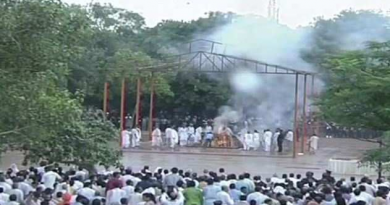 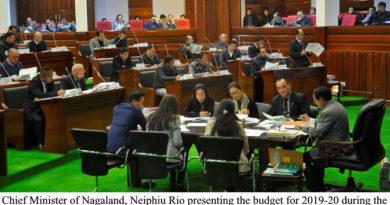