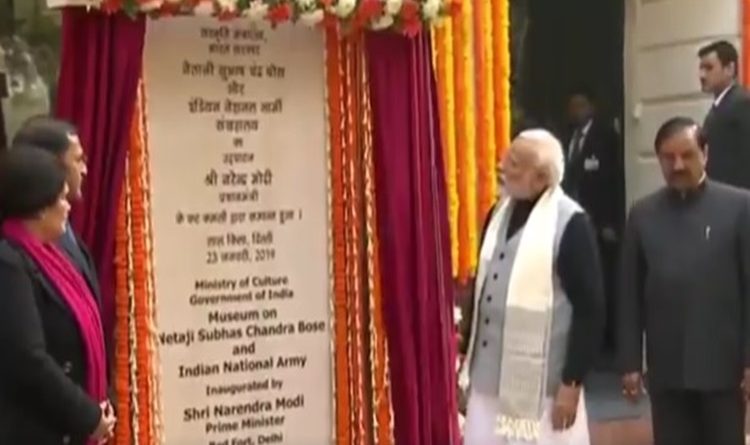 REMEMBERING heroes of freedom struggle, Prime Minister Narendra Modi paid floral tributes and inaugurated the Subhas Chandra Bose Museum at Red Fort on his 122nd birth anniversary. PM Modi visited the Museum on Netaji Subhas Chandra Bose and Indian National Army. PM said, ‘I bow to Netaji Subhas Chandra Bose on his Jayanti. He was a stalwart who committed himself towards ensuring India is free and leads a life of dignity. We are committed to fulfilling his ideals and creating a strong India.’  He also added that History echoes from these walls. In this very building, brave sons of India, Colonel Prem Sahgal, Colonel Gurbaksh Singh Dhillon and Major General Shah Nawaz Khan were put on trial by the colonial rulers. He glanced over the photographs depicting a detailed account of Subhas Chandra Bose and the history of Indian National Army. PM also saw some of the artefacts associated with Netaji and INA such as wooden chair and sword used by Netaji, medals, badges and uniforms of INA.The Prime Minister browsed at the photographs, paintings and newspaper clippings depicting the authentic account of Jallianwala Bagh massacre showcased in the Yaad-e-Jallian Museum. The museum intends to take visitors through the history of Jallianwala Bagh massacre of 1919 and sacrifices made by Indian soldiers during World War-1.He also visited the Museum on 1857- India’s first war of Independence and saw the portrayal the historical narrative of 1857 war of independence depicting the valour and sacrifices made by Indians during the period. These museums showcase the sacrifice of our freedom fighters, PM Modi added. Prime Minister had a look at the Exhibition on Indian Art at the Drishyakala- Museum organized at the same venue. He said ‘To see Gurudev Tagore’s works at Drishyakala is a treat for art lovers. We all know Gurudev Tagore as a prolific writer but he also had a strong link with the world or art. He produced lots of works, featuring multiple themes. Gurudev’s works were also exhibited internationally.’ He also tweeted ‘I would specially urge art lovers to visit Drishyakala, which will take you through the finest aspects of Indian art and culture. Works of eminent Indian artists like Raja Ravi Varma, Gurudev Tagore, Amrita Sher-Gil, Abanindranath Tagore, Nandalal Bose, Gaganendranath Tagore, Sailoz Mookherjea amd Jamini Roy are on display at the exhibition.’PM while inaugurating the museums said that,  it was extremely humbling to inaugurate four museums relating to India’s rich history and culture. All four museums have been named as Kranti Mandir. This complex includes Museums on Netaji Subhas Chandra Bose and the Indian National Army, Yaad-e-Jallian Museum (on Jallianwala Bagh and World War 1), Museum on 1857- India’s First War of Independence and Drishyakala Museum on Indian Art, spanning three centuries, with over 450 works of art!Kranti Mandir is a tribute to the revolutionary zeal and courage of our great freedom fighters. Ahead of the Republic Day, these will deepen the connect between our glorious history and our youth as well as add to the patriotic fervour among citizens.At a separate function  held in the  Central Hall of  Parliament, leaders  led by Chairman of The Ethics Committee and former   Deputy Prime Minister Lal Krishna Advani also paid homage to Cuttack born Netaji Subhas Chadra Bose along with  Leader of Opposition in the Rajya Sabha Ghulam Nabi Azad, Minister of State for Parliamentary Affairs and Statistics & Programme Implementation Shri Vijay Goel .Other  dignitaries included  former Members of Parliament and the Secretary-General of Lok Sabha Smt. Snehlata Shrivastava booklet containing the profile of Netaji, brought out in Hindi and English by the Lok Sabha Secretariat, was presented to the dignitaries. The portrait of Netaji Subhas Chandra Bose was unveiled by the then President of India, Dr. N. Sanjiva Reddy, in the Central Hall of Parliament House on 23 January 1978. 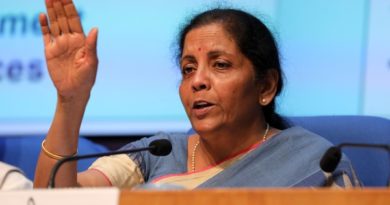 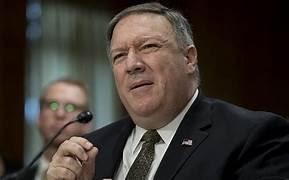 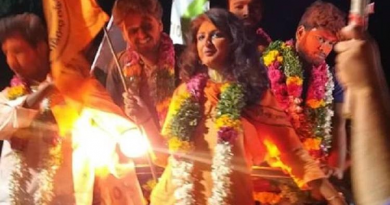