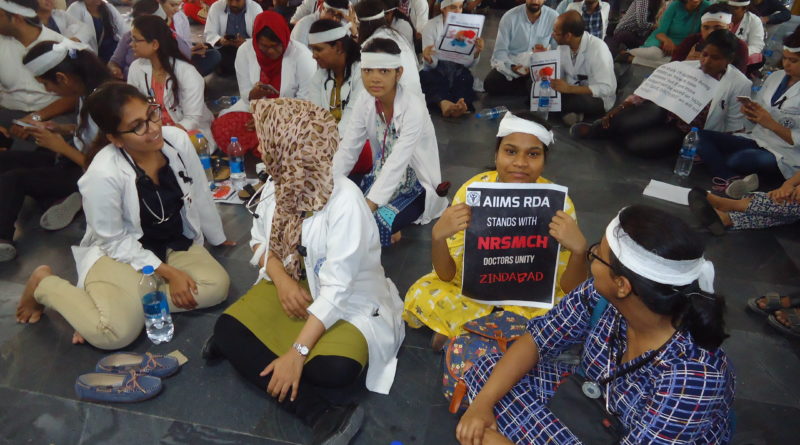 INTELLECTUALs and senior physicians have extended support to the junior doctors agitating in West Bangal demanding safety in the hospital premises. They allege anti –socials are roaming around government hospitals in Bengal and threatening them .Defying threat by Chief Minister Mamata Banerjee for termination of services and throwing them out of hostels if they do not resume work, their agitation on Friday entered the fourth day as doctors from across the country empathising with them. They have condemned Chief Minister for giving political and communal colour to their just movement. CM should withdraw her statement and apologize, the junior doctors said. Para medical staffs have also joined the movement with senior doctors sending in their resignations. A dock and a medical student belonging to the ruling TMC extended solidarity with the protesting doctors leaving many surprised. One of them is nephew of chief minister Mamata Banerjee and the other is daughter of Calcutta mayor and urban development minister Firhad Hakim, a close confident to the TMC supremo. Meanwhile, doctors across several states on Friday stayed away from duties expressing sympathy with their protesting colleagues in West Bengal. Doctors in Delhi, Mumbai, Bengaluru, Hyderabad, Jaipur Thiruvananthapuram and other places staged protests hampering medical services in various towns and cities. Doctors at Delhi’s All India Institute of Medical Sciences (AIIMS) were seen wearing helmets and bandages as they attended to patients. The Bengal doctors have been on a strike since Tuesday after a junior doctor was assaulted at Nil Ratan Sarkar Medical College and Hospital in Kolkata by relatives of a patient. The kin alleged due to negligence on the part of docs he succumbed to ailments. Senior BJP leader Mukul Roy alleged that members of a particular community had carried out the attack on doctors and that the perpetrators belonged to the TMC. The doctors defied Chief Minister Mamata Banerjee’s ultimatum, saying they won’t get back to work until they get better security. Mamata Banerjee has accused the BJP and the CPI-M of engineering the strike and playing “Hindu-Muslim politics”. Urging the doctors to hold only symbolic protests, Union Health Minister Dr Harsh Vardhan, who met a delegation of doctors, blamed Mamata Banerjee and said it is her “threat” to the doctors in her state that led to the nationwide protests. Mamata’s nephew Abesh, son of her brother Kartick, was one of those who led a march by a team of junior doctors from KPC Medical College and Hospital in Jadavpur towards NRS Medical College and Hospital on Wednesday. Kolkata Mayor’s daughter Shabba Hakim criticised the government for “inaction” in a Facebook post.Abesh is a student of KPC Medical College, from where Shabba has graduated. Shabba said as a Trinamool supporter, she was “deeply ashamed at the inaction and the silence of our leader”(edited by Pranab Kumar Chakravarty with inputs from varied sources). 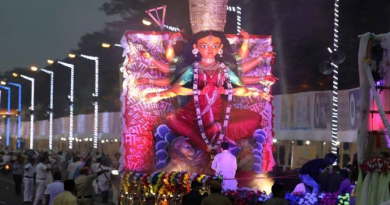 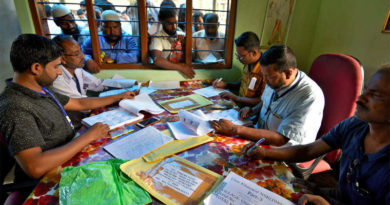 BENGALI Students Protest against NRC for Leaving Out Genuine Indians