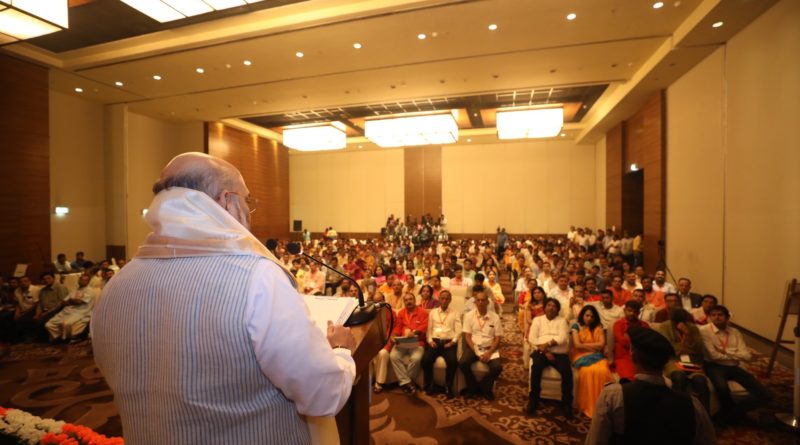 THE Road Show  by BJP  President Amit Shah in Kolkata on  Tuesday, May 15, drew  huge response before it was  cut short  as it was nearing  its destination  due to clashes  between  BJP and the TMC  supporters .He later had interaction with intellectuals in the city.Political pundits compared it with  the one that was  undertaken by Prime Minister Narendra Modi in Varanasi before filling his nomination  papers  seeking re-election to the Lok Sabha . Both the road shows are stated to be unprecedented in the political history of the two famed cities given that the NDA led by BJP is contesting the 2019 Parliamentary elections against countless opposition parties. All the candidates fielded by in Bengal along with several central and state BJP leaders joined him in the road show. Clashes broke out between BJP supporters and student activists and those of the Left and Trinamool Congress Chatra Parishad (TMCP) during the Amit Shah’s road show .Trouble began after stones were pelted at Amit Shah’s convoy as it passed through College Street and the arterial Bidhan Sarani on its way to Swami Vivekananda’s residence in north Kolkata, a little over 3.5 km from Esplanade in the heart of the metropolis where it commenced. A scuffle broke outside the Calcutta University campus on College Street, when student activists of both the Left and the TMCP shouted slogans against Shah, officials  said.The showed black flags and waved posters with “Amit Shah go back” written on them. The police controlled the scuffle. A clash took place outside Vidyasagar College and university hostel when TMCP activists pelted stones at Shah’s convoy, the officials said.The agitated BJP supporters locked the gates of the hostel and set cycles and motorbikes parked outside on fire. They also threw stones at the building; The Pioneer reported quoting unmanned officials. A bust of Ishwar Chandra Vidyasagar, after whom the college is named and was outside hostel building, was broken during the clash. A huge police contingent was rushed to the spot and controlled the situation, they added. Before  the  clashes, Amit Shah’s  Road Show from Dharamtala,turned out to be a  grand show for the BJP  ahead of the last phase  of the  Lok Sabha  polling on  May 19. Chants of “Jai Shri Ram” filled the air as the Bharatiya Janata Party (BJP) president  Amit Shah’s road show progressed  .Mamata Banerjee-led TMC government did not give permission for Amit Shah rally. BJP chief, who a couple of days ago dared Mamata Banerjee to arrest him for publicly  chanting Jai Shri Ram , went ahead from Shahid Minar in the  heart of the  mega city. It was to terminate near Swami Vivekananda’s residence in north Kolkata’s Mankatia area. But he could not fulfil  his long cherished   desire for paying  homage to the great philophoser and seer as soon as it  reached  the  University of  Kolkata  and  the Vidya Sagar  College , clashes  started between the  supporters  of TMC and BJP.As Amit Shah’s cavalcade trudged along, making its way through the crowd, thousands of BJP supporters danced in traditional attire shouting “Modi, Modi” slogans, something that has become a routine in the Lok Sabha Election 2019 poll campaign. As his caravan moved, the BJP chief exuded confidence after seeing the support of the people. Talking to India TV correspondent, Amit Shah said, “This is the support and love of people that you are witnessing. People in West Bengal want change.” Before the commencement of the cavalcade, posters of BJP chief were removed by the local administration. BJP leaders accused the state administration of “resorting to hooliganism” to impede Shah’s rally and alleged that the state’s ruling Trinamool Congress activists were deliberately damaging the posters and cut-outs while removing them. TMC and the BJP have been engaged in a high-octane battle in the eastern state. While BJP is going all guns blazing against Mamata Banerjee, the TMC supremo has single-handedly tried to thwart that surge. Opposition leaders have rallied behind Mamata Banerjee while BJP has managed to sleepless nights to TMC leaders and workers. (edited by Pranab Kumar Chakravarty with input from various sources) 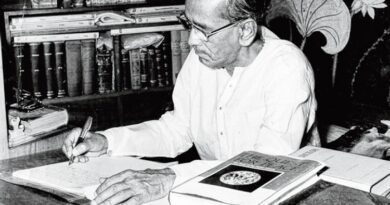 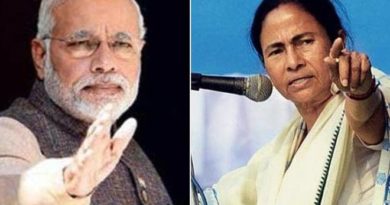 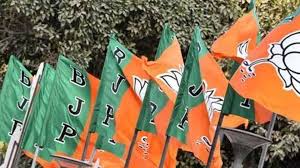