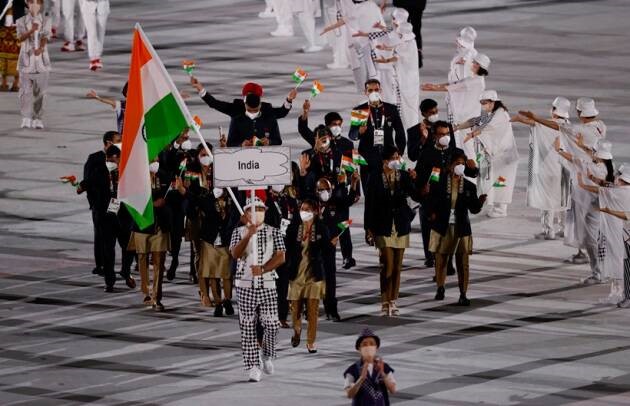 The scaled-down Tokyo Olympics was delayed by one year due to Covid 19 pandemic commenced on Friday, July 23 in a virtually empty stadium with a colourful march past by the participants from 205 nations including India. Millions of Indians cheered their Olympics Contingent as Mary Kom, five-time world champion boxer,  and Manpreet Singh, India’s Men’s hockey captain,  led their country at the Opening Ceremony. Sports Minister Anurag Thakur and his deputy  Nishith Pramanik along with officials joined the cheering crowd at the National Stadium in Delhi. The teams entered the stadium carrying their national flags in alphabetical order according to the language selected by the organising committee, generally the dominant language in the host city. The announcers first called out a country’s name in French and English — the official languages for the Games and then the chosen language. At the 2018 Winter Olympics in Pyeongchang, nations entered according to the ‘Hangul’ alphabetical order.

The Parade of Nations always begins with Greece, the host of the ancient Olympics and the first modern one. The host nation always closes out the ceremony. This year the IOC ensured the next two Olympic hosts preceded Japan. The  2024 hosts will be  France and The United States will be hosting the 2028 Multinational games. The ceremony preached a message of unity in adversity while showcasing Japanese traditions and culture recognized across the globe — traditions that include anime and video games. Japanese celebrities will perform and the Emperor of Japan will appear. The ceremony highlighted Japanese traditions and culture. From Manga to Mt. Fuji, Japanese art and culture were on display during the ceremony. The massive 68,000 capacity Olympic Stadium accommodated less than 1,000 people comprising mostly journalists, Olympic officials and dignitaries such as First Lady Jill Biden. The guests were required to sanitize their hands, scan their credentials and present their tickets. The entrances and stairs leading to the national stadium are lined with Hydrangea plants representing understanding, emotion and apology. Each plant is affixed with a note written by elementary students from schools nearby as hundreds of Japanese protesters gathered in central Tokyo at Harajuku station shortly before the ceremony started. Edited by PK Chakravarty with inputs from agencies. Picture courtesy to Reuters. 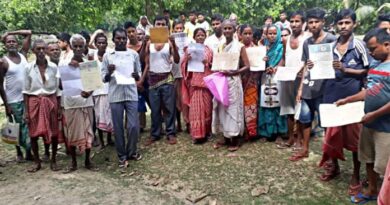 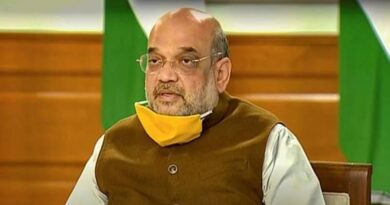 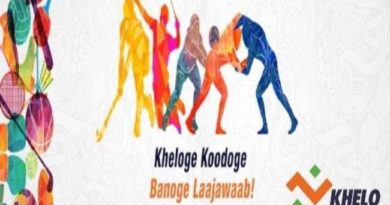